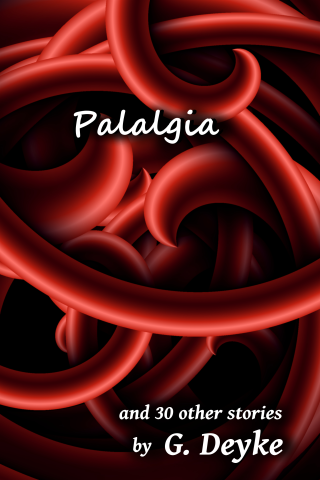 This year’s Flash Fiction Month collection, Palalgia, is now out on Smashwords!

I’ll admit it’s a bit of an awkward title, in that pronouncing it may cause some confusion (I have determined that the G must be soft, as in nostalgia), but it seemed appropriate given the high volume of shovel-related deaths in here (thanks again to Amelia Mackenzie). Palalgia is a word I’ve stitched together from my basket of spare root words and suffixes, meaning: pain or suffering inflicted by shovels. There’s quite a lot of that in there.

This FFM series is growing year by year: they’re starting to look really nice together.

Here are a few other books (not by me) which you might find interesting:

Kelsey Williams has written an anthology of nineteen dark stories: The Tomorrow Garden. Perhaps I should not be recommending books I have not yet actually read, but I’ve been fairly impressed with her work lately, so it seems that The Tomorrow Garden is worth checking out! You can find more information here.

And finally: Kicking and Screaming, edited by A. T. Douglas, is an eclectic anthology of short stories with proceeds going to charity. I haven’t actually read this one either, but I have read one story which made it in, and I quite enjoyed that one story: so at the very least, it has intrigued me.

Another July has come and gone: another Flash Fiction Month has been conquered.

It’s been an  interesting month [double space intentional]. I’ve had quite a few obstacles to work around this year: first of all MillieBee‘s excellent shovel challenge, which I hope I’ve completed to her satisfaction as well as everyone else’s (it did turn out less humorous than anticipated, but then so did the entire month); then, the fact that I spent the first two weeks of July abroad and thus had to do most of my writing in the second half of the month; and finally some personal issues over the first week and a half or so that I was back, which effectively crippled my ability to think creatively or analytically until about the last week of July. As you might imagine, this put a bit of a damper on my ability to write for a while there.

Despite all of this, I have written all 31 stories, answered all 14 challenges, and committed all 10 shovel-related murders: which, especially considering the circumstances, is a feat to be celebrated. It has had some interesting effects, though. Most noticeable is the average tone of the stories, which is frankly a lot darker and heavier than the last two years. I generally try to produce a balanced mix of stories (some humor, some horror, some fairy tales, some sci-fi, some fantasy, some realism; some serious stories, some silly stories), containing a little bit of something for people of every taste: that hasn’t happened this year. The surrounding darkness has dragged even my most serious attempts at humor into either morbidity (well, morbid humor is still humor, at least) or accidental poignancy. This is partly due to the shovel challenge, which does encourage lethal violence (quick challenge for those who’d like one: write a story in which a shovel causes a person to die non-violently. I dare you.), but in greater part it’s because of the creative/emotional/logical block which sealed me away from humor – and innovative thought – for much of the writable portion of the month. Again, I’m actually quite impressed with myself for finishing at all under the circumstances: and all the more so because I’ve had a surprisingly positive response to stories written under these conditions. Apparently I did actually manage to write humor a few times in there, despite an inability to feel it.

I’ve since broken through that block, by the way, and I’ve made something of an effort to rescue the tone of the collection in the past week (with mixed results). Having to catch up, and thus writing stories out of order, has actually been extremely lucky in terms of balance: it means the lighter stories are a bit more scattered between the darker ones, doing something to break up the clump of horrible doom.

More surprising has been the effect on the overall length of my stories. It’s something of a point of pride for me to include at least one 55-word story and at least one 1000-word story each year (mainly for the sake of absolute accuracy when I write something along the lines of ranging from 55 to 1000 words into the blurb of the collections), and last year (when I was also traveling for the first part of July) I ended up writing quite a lot of 55ers in order to catch up more quickly; but this year I have written – shall we count? – eleven 55ers, and seven stories with a wordcount over 900 (with three complete 1kers in there). Over half the month consists of “outliers” with extreme wordcounts, and despite those eleven 55ers I fully expect a higher total wordcount this year than last.

I’m not quite sure what to make of this. The many 55ers at least have an obvious source: when one must write several stories a day, they go a lot more quickly if they’re extremely short. What I don’t know is how a creative block resulted in a lot of stories that were just about as long as possible. It is a mystery!

I’ll be beginning work on the e-book collection forthwith: it should be ready within about two or three weeks, judging by the last two years.

In the meantime, here are some FFM features! I’ve still quite a bit of reading to catch up on, but here are some of my favorite challenge-day stories:

Per joe-wright‘s instructions, ThornyEnglishRose combined Beatrix Potter with Vietnam in “The Tale of Kitten Clamber”, to jaw-dropping effect (no lie: my jaw quite literally dropped. Then, I had no warning).

Many of these stories had the unfortunate tendency not to make much sense without foreknowledge of the historical figures in question, which – given that they were, per instruction, necessarily little-known – was generally crippling. Not so with “Land’s End” by joe-wright. While it draws heavily from reality, the story functions alone. Beautifully written historical fiction at its finest.

“Restless Bones” by WizardandGalaxy is about dinosaurs: which, really, should be all the review it needs. For those philistines who are not immediately swayed by a mention of dinosaurs, though, I’ll also say this: it’s fantastic to visualize, and timely on at least two different levels.

I know this day was a realism challenge, but hey, I like speculative fiction. This might be why I like C-A-Harland‘s “The Dunes Have Eyes” so much. While it doesn’t actually include any speculative elements (thus neatly falling within challenge parameters), it certainly hints at them. It also handles the slang/jargon element a lot more smoothly than many responses to this challenge: the jargon feels natural, rather than sticking out or looking shoe-horned in.

“Awakened” by Oreramar takes this challenge in a unique and fantastical direction. The changing points of view really work in this one, especially for the final section.

“Summer Habits of Dragons” by LadyBrookeCelebwen is hilariously written, and really showcases the importance of voice: especially in an epistolary piece.

I love IntelligentZombie‘s “Bunker Baby” on several levels, and for several reasons. There were a lot of elements to this challenge, and she incorporates all of them in a way that is not only seamless, but astoundingly unique: a situational-irony punchline that isn’t funny, a drastic tone shift that doesn’t belie or betray what comes before. The world-building in this piece is excellent, with a graceful incorporation of the disparate mythologies. The style is such that the many mentions of colors don’t stand out. Truly, I am impressed.

SCFrankles can always be counted on to take something in an unexpected direction, and “Smoke Gets In Your Eyes” is no exception. Clever, imaginative, and (of course) amusing.

“Worst Invention Ever” by distortified is surreal without collapsing into nonsense and definitely humorous. As is so often the case, it’s the voice that makes this one.

IntelligentZombie was one of the many, many people with whom I collaborated for this day. Her “Razor Blade Man” is scary and sensual: it combines sex with horror (without getting into anything unsavory: refreshing in its own right), which makes for a surprisingly effective combination. Hers is probably my favorite portrayal of the shared character within our squad.

It is (or ought to be, at any rate) a well-known fact that I love interactive fiction; it should be no surprise that this was one of my favorite challenges, and that reading through the other entries was a special treat for me. It may come as a surprise that my favorite among them was one of those that broke the format. “Page 5: The angels are here. Don’t-” by IntelligentZombie is horrifying and delightfully meta, taking advantage of the format it breaks in the best possible way. (It’s also fanfiction, but it’s that best kind of fanfiction: effective even if you’ve never seen Doctor Who. All you’re really missing is the punchline.)

“Totentanz” by KiriHearts is beautiful and poetic, using its 55 words to their best effect.

SCFrankles is best known for her humor – and indeed, “Midlives Crisis” is not without its punchline. Nonetheless, I find it interesting and thought-provoking on a serious level. There’s a fascinating concept in there.

I loved this challenge for the huge variety of responses it encouraged. ilyilaice drank a corked bottle of effervescent liquid, several petals floating within, which led her to write “Wild White Roses”: a story which seamlessly blends two vastly disparate tones, to hilarious effect.

Thanks to the Hydra in charge of Flash Fiction Month; to everyone who participated; and to everyone who’s been reading along. It’s been a great FFM as always, complications aside. Looking forward to next year, and I’ll see about getting that collection out soon.